And so we're already up to the August issues of the magazines starting with Myojo and Popolo.

There were quite a number of spreads for two magazines but fortunately they were mostly in Myojo which is a much friendlier magazine to wrangle across a scanner than Popolo. But we can't complain about the ongoing efforts of the magazines to reinforce time and again that these days it's no difficulty at all to get all of NEWS in the same photo.

And Myojo has also offered us quite a collection of knees ... though I did wonder if Tegoshi is trying out his Bindi Irwin look. She even sings and dances.

The best news though is that before Myojo and Popolo come round again, NEWS will be back for real! 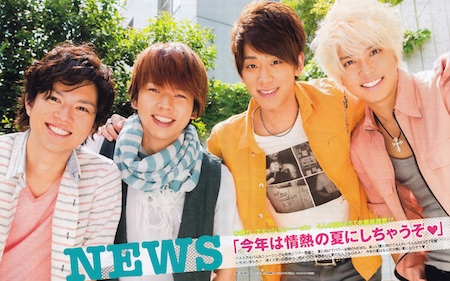